This was a well attended meeting, particularly for the first one of the new year and it was nice to get back to playing after the excesses of the Christmas period.

The evening began with Adrian and Darren who played Oh, Lady Be Good by George Gershwin. The melody to this was played by Darren, Adrian superimposed the melody to Hackensack by Thelonious Monk which is based on the same chord sequence. The duo followed this with the Parker classic Yardbird Suite.

Ben, Dave and Chris followed with Once I Loved by Tom Jobim. This was  accomplished as always, with some nice playing from all parties. This was followed by The More I See You, this began with a nice, pedalled introduction before moving  into a more regular swing feel.

Colin, Charles and Phil were the third group. It was nice to hear Charles play guitar for a change, he normally plays bass. The trio played Moondance. This had a false start duo to a tuning issue but it carried on from where it left off, it was worth stopping as it was much nicer in tune.

Jez and Hayden played us  into the break. They played the blues classic Freddie Freeloader, a Miles Davis classic from the 1959 album Kind of Blue.

After refreshing the drinks and buying/selling a few raffle tickets it was time for the second half to commence. It began with newcomer Paul Wrigley on bass who was joined by Darren and Steve McGuire who sang Fly Me to the Moon.

Trefor Owen  and Andy Hume joined us from the Cheadle guitar society. They began with Days of Wine and Roses by Henry Mancini. This featured Trefor’s trademark ‘comping’ style, who needs a bass player, its all there. Andy played a delightfully bluesy solo which suited the track really well. The followed this with another Mancini piece, Dreamsville, a lovely ballad which works really well on two guitars.

Larry and Ben are an accomplished pairing who play very well together. They began with another Jobim classic, Meditation. This featured Larry both singing and playing guitar with Ben supporting on bass. It’s a different tune with some tricky changes but the duo made a good sound. Ben played a particularly nice bass solo. They followed with Fly Me to the Moon which was having its second outing for the evening.

Dave Allen and Paul were the last up before the ensemble jam at the end. They began with the beautiful Bonfa penned classic Gentle Rain. This was a controlled version with some nice playing from both. They followed this with Lover Man.

Next months tune is My Funny Valentine.

HJGS stalwarts Martin Chung and Jez Platt have consolidated the musical partnership, developed at our monthly meetings, by forming ‘Dual Space’. Details can be found on their website: –

An unusual combination you might say which presents some obvious challenges!

Fortunately the 3B offer different bass sounds; acoustic double bass, fretless bass and 5 string electric bass plus there are three octaves in terms of register to work with.

The first step is to select an appropriate piece that will work with 3B. Learn the tune. Play it, sing it, try it on a different instrument. Make a plan of the arrangement.

Balance in the arrangement is vital in terms of dynamics and structure.

You may come up with an idea as you start to arrange and get to know the tune more analytically. You could use part of the tune or develop an important interval or motif that suggests/ leads us into the first statement of the theme.

Is there a way to make the head sound a little different?

In the arrangement of Mr P.C. the main theme is played in unison over 3 octaves giving the start some impact. The second time through 2 basses share the theme in 2 different octaves with an extension of the last phrase over a walking bass. The third time through starts with the DB playing the theme with fugal entries using the upward quaver motif. The end of the head section finishes with the last phrase repeated by all 3B and then in unison again for intensity before the solos start with walking bass and chordal accompaniment.

The recap of the head at the end of the arrangement does not have to be a straight repeat of the opening and its better to try to put something new in there (or something you develop from the exposition) both for the players and the audience.

The DB has the last solo in Nostalgia (accompanied only by the chords, no walking line to change the texture)which leads back to the intro notes. Two basses then trade the theme but finally all three take part of the theme in different registers to emphasize clarity and a unison figure closes out the arrangement.

The arranger also has the opportunity to present the piece perhaps with a different time signature!

Changing the tempo can also offer a different perspective on a tune.

Don’t try to have more than two ideas going at once! (complexity is sometimes confusing).

Listeners like consistency but also to be surprised! Having said that don’t be too predictable!

As jazz musicians we are arranging every time we play as long as we are responding and listening to our fellow performers. Perhaps it’s a little contradictory to write jazz down but doing an arrangement for a combination of instruments alerts you to the possibilities that can give you more variety and also challenge you to do some different things out of your comfort zone!

At the December meeting society member Dave Allen produced a rather splendid arrangement of Thelonious Monk’s classic Round Midnight. This was performed by Dave, bass player Paul Crompton and guitarist Darren Dutson Bromley. Dave has been very generous allowing us to publish the score and parts and has given us the following accompanying notes on how he created the arrangement.

Comments on my arrangement – Dave Allen

We recently performed “Round Midnight trio version” – arranged for 2 jazz guitars and bass guitar. I’m not a natural composer (or arranger) so this took ages! However, I was determined to finish this as a tribute to my late colleague, Dave Taplin. We worked together at QEGS Wakefield (I’m still there) for several terms leading up to his death a few years ago. Through Dave I was able to develop my classical technique and approach to performance that helped me improve my all round teaching skills. He was also a thoroughly good bloke who was well liked and fun to be with. He suggested we play something together at a concert, but I could not really add anything to the massive recital pieces that he played from memory, so we decided that I should select and arrange a jazz standard:

I like Monk’s tunes. They’re all so different and quirky. “Round Midnight” just came into my head so off I went – hours in front of a computer! I think there’s much more scope for arranged jazz. I know that seems a bit of a contradiction in terms but its a way of getting more classically trained players on board. It’s good enough for Pat Metheny (composed and arranged) so let’s make more of it! A guitarist friend told me that he finds arranging more challenging than composing. He said that you could just let the instrument help you when composing a guitar solo. You can, for example, move a shape around, arpeggiate it, and sort of see where your fingers want to take it harmonically and rhythmically. The difficulty in arranging (for me) is that you typically have a melody and an accompaniment (set of chords) in the original. What do you do with third and fourth guitar parts? Probably even harder when you have 2 single line instruments to add such as trumpets or saxophones. I’ve opted for one or two counter melodies in places: 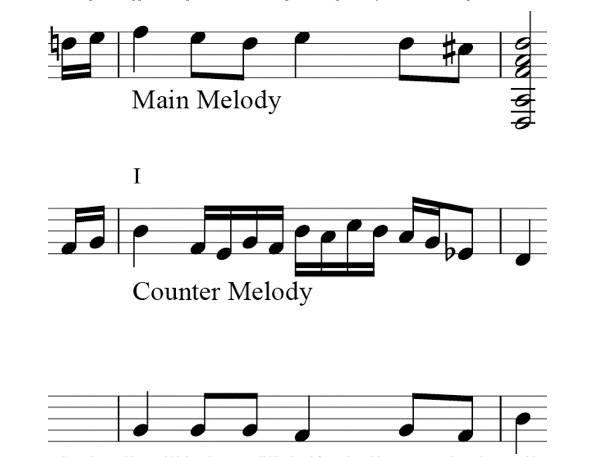 I wanted the arrangement to focus on harmony and chord substitutions as the main development tool. Seems quite arbitrary/abrupt in places like in bar 51-52 where I manage to get into A major: 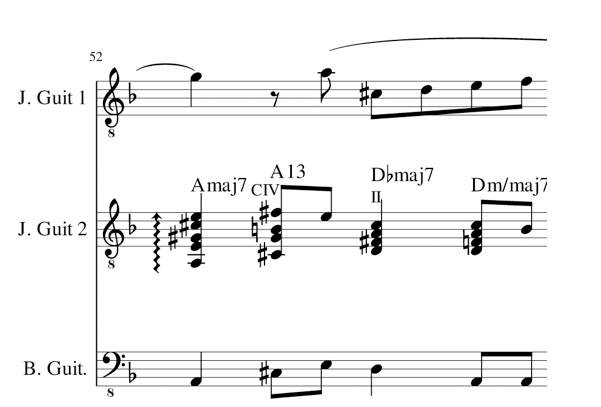 Also, at the end of the piece having got myself into G flat major I had to quickly get back to D minor for the ending. Paul later gave one or two suggestions using diminished chords that I will keep in mind for future arrangements. However, on this occasion I just got back to d minor using a B flat/ A chord:

I love the tritone in so much of jazz so there’s lots of E flat instead of A in the bass. Also wanted to incorporate composer’s techniques using floating chord effects. In the example below, jazz guitar 1 has harmonics whilst gtr 2 has unusual chromatic chords and the bass has a melodic fill: 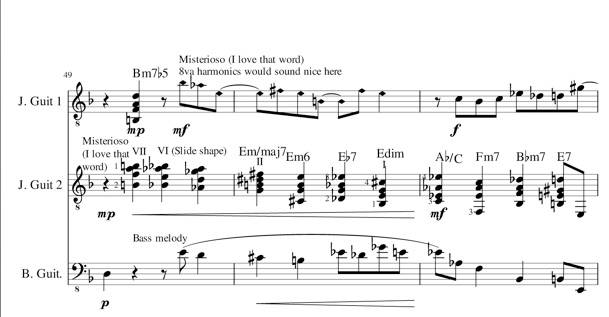 Use of strummy chords because I like those used in flamenco:

There are also whole tone scale effects, as in the following bass guitar part, and familiar jazz guitar chord sequences/ quotes such as the sequence you may recognize from Joe Pass’s “Days of Wine and Roses” from “Catch Me” album.

Use the following button to download the full score and parts.