The idea for this article came about through watching two guitarists play a short while ago. This really isn’t a criticism of their playing as I enjoyed what they did but each noticeably had a clearly defined role, one player played chords, off the peg shapes strummed four to the bar whilst the other guitarist played a solo, after a while the players swapped roles. A really good friend of mine, an excellent musician, orchestral conductor and pianist often jokingly describes jazz as “you show off then he shows off and then sometimes you both show off together”. Whilst this is said in jest there are times when this does occasionally ring true and his words popped into my head as I watched these two players. While there is a validity to their style of playing, it can be more musically satisfying to listen to two players who are both actively contributing to the development of the composition. Listen to Joe Pass and Herb Ellis for example, they create lines and parts which weave together in a form of counterpoint and the rhythm parts are stripped back to much small chord shapes yet played in a way to create greater harmonic movement and texture. This article explores some ways to achieve this.

In harmony the third and the sixth Intervals have a rich sound whilst the 4th, 5th and 8va quite a bare sound and the 2nd and 7th sound a little discordant.

Here is a C major scale harmonised in 3rds.

Taking the third up an 8va we arrive at a 10th, still the same two notes but there is more distance between them.

Here is the same scale but this time in 10ths.

Many players use the interval of a 10th as a foundation to their playing style, it can create a rich musical sound whilst remaining fairly transparent making it easier to facilitate solo guitar playing.

Here is an example of a familiar progression played just using 10ths. The harmonic intentions of the piece remain intact even though the chords have been stripped back to just two notes. The 10th is indicated with the bracket, the two chords at the end without the brackets are a 7th and an 8va. 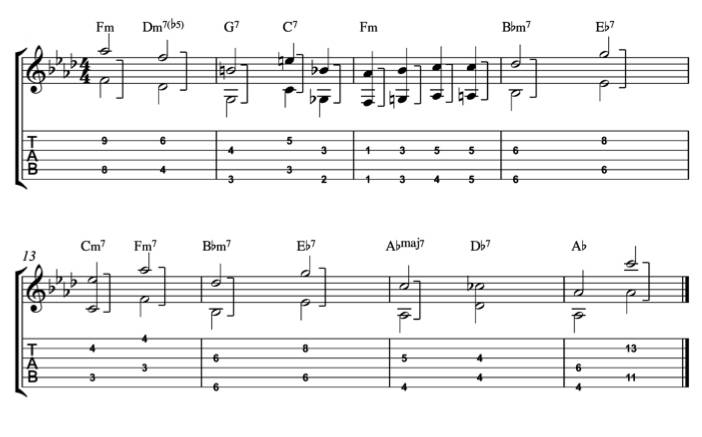 Here is the same progression used as a basis for a solo. 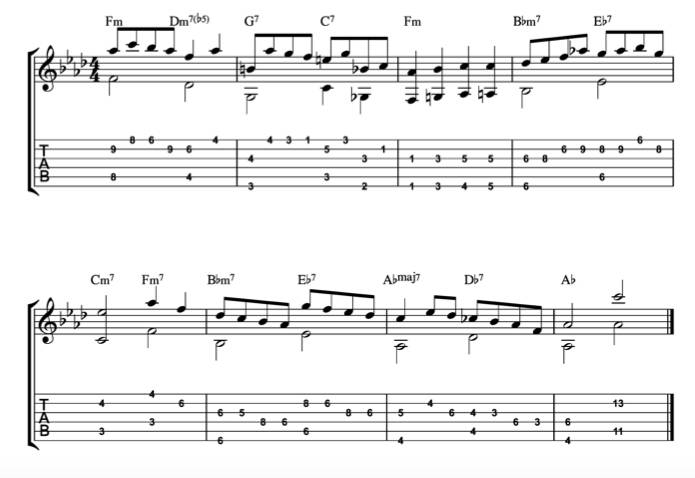 The 10th can be used as the foundation for constructing three note chord voicings; these are effective whilst comping as they can potentially create some interesting movement without getting in the way.

With a 10th added it looks like this. This in itself is a really interesting and effective device that can be used to good effect.

By adding another note to each of the intervals, usually one taken from the actual chord, in this case G7 and C7 it is possible to build a series of three note chord voicings.

This approach in combination with a number of chord substitution devices is a great way for creating moving harmonised bass lines. Often the most effective chord substitutions are the addition of dominant chords (secondary dominants), tritone substitutions and m7 chords a perfect 5th above the original chord functioning as ii – V7 progressions. This is often called back cycling and can create strong harmonic movement.

Adding G7 to the C7 bar creates a bit more movement. G7 is the dominant of C7.

Approaching the F7 with its dominant and in turn including a m7 chord a perfect 5th above C7 creates a ii – V7 progression onto F7.

It is then possible to add D7, the dominant chord of Gm7 and a m7 chord a perfect 5th above this, again it creates another ii – V7 progression

Adding E7 will leading into Am7.

As three note voicing this can be played like this.

Look for similar examples in this blues. The above example is used in bars 3 and 4. 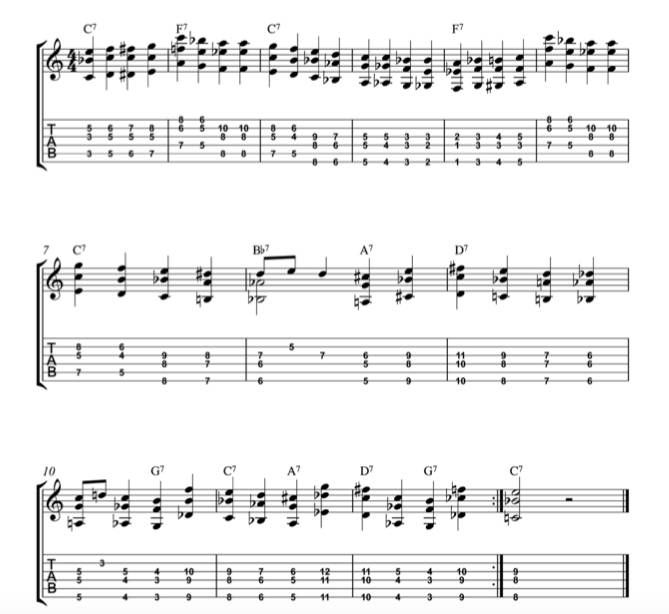 Undercurrent is a 1962 album by jazz pianist Bill Evans and jazz guitarist Jim Hall. This album is a true classic often featured in listings of some of the best jazz albums and is a master class in how to play in a guitar and piano duo. The opening track is an up tempo version of the Rogers and Hart classic ‘My Funny Valentine’. 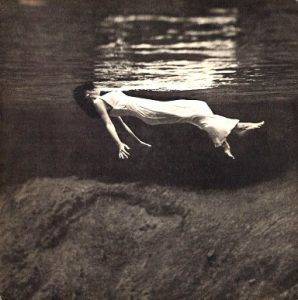 Whilst this tune features some clever and considered solo playing from Jim Hall one of the standout moments in the track is in Bill Evan’s solo when Jim begins to comp using three note chord voicing which really drives the tune along. Here is a transcription of what Jim plays. 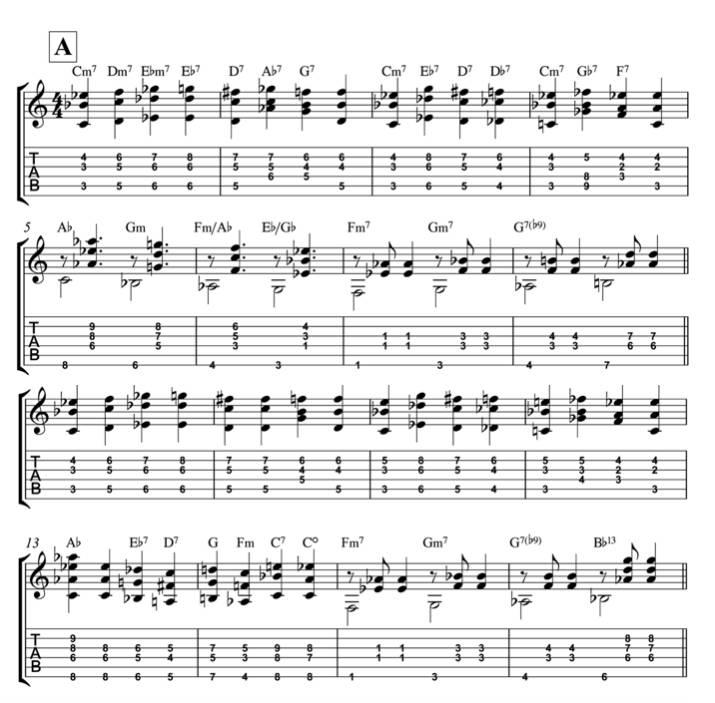 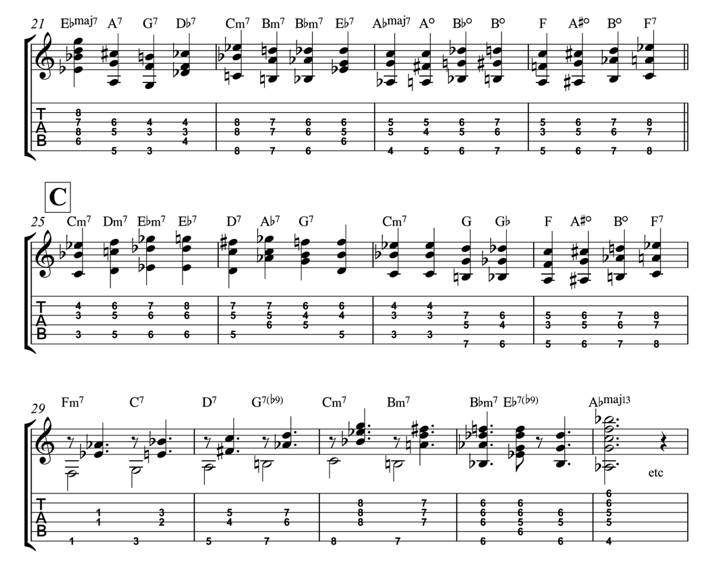 The Girl From Ipanema

The Girl From Ipanema (Garota de Ipanema) is a Brazilian bossa nova written in 1962 by Antônio Carlos Jobim with lyrics by Vinicius de Moraes. English lyrics were written later by Norman Gimbel. It was a worldwide hit in the mid-1960s and won a Grammy for Record of the Year in 1965.

The first commercial recording was in 1962, by Pery Ribeiro but it was the 1964 single featuring Astrud Gilberto and Stan Getz which became the international hit. This had been shortened from the version on the album Getz/Gilberto which had also included the Portuguese lyrics sung by João Gilberto.

Bossa Nova (New Beat) originated in Rio de Janeiro in the late 1950s and is probably the most well known form of Brazilian music. It has an original rhythmic accent which divides the phrasing of the samba and adds to it more complex, jazz influenced harmonies and an intimate and gentle singing style.

Generally the bossa nova, like the samba is felt in two. Although in the real books bossa nova’s are generally presented either in 4/4 or cut common time I’m going to write the following examples in 2/4 as it represents a more authentic interpretation and it is also how it is written in Brazil.

The Spanish (and also the Portuguese) word clave translates as key.  The clave has its origins in Sub Saharan African music and is a rhythmic pattern found in Afro-Cuban, Jamaican mento and music from Brazil. The clave is a rhythmic figure which is the root of most of the rhythmic patterns and is usually played all the way through a song on a percussion instrument.

The clave can also be played inverted but once the pattern begins it doesn’t revert.

On the guitar the bossa nova is usually played finger style with the right hand patterns based on the clave figure.

A variation to this basic pattern is with a semiquaver syncopation on the first beat. This coincidentally is a basic samba rhythm.

The Stan Getz and João Gilberto version of The Girl From Ipanema is in the key of Db as opposed to the key of F major that is usually found in the real books. Gilberto’s chord voicings for the A section contain the fifth of each chord played in the bass. He performs fingerstyle, separating the rhythms of the thumb from the index, middle, and ring fingers. Brazilians feel the bossa nova in two with the thumb functioning to provide a steady anchor on each downbeat 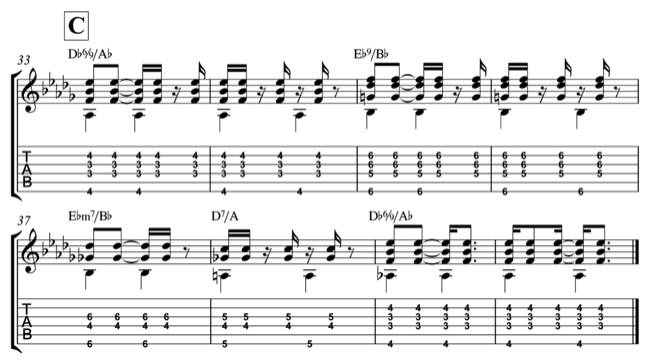 Harmonically the chord progression for the A section follows a very straightforward pattern embellished with a few common chord substitutions, shown here in the more familiar key of F major.

This is the sequence stripped back to its most basic form, just a series of tonic and dominant chords.

Approaching the C7 chord with its dominant chord (G7) gives the progression a stronger harmonic direction and more interest. This is commonly referred to as a secondary dominant.

An often used technique is approaching a dominant chord with a minor 7th with a root a perfect 5th above, this effectively creates a ii-V7 progression.

This is now a very common progression used as the foundation to many songs such as Take The A Train, Exactly Like You, Watch What Happens, Jersey Bounce and So Danco Samba

The tritone substitution is frequently used in bossa nova and helps create that characteristic sound. By replacing the C7 chord with another dominant whose root is a flat 5th above (Gb7) we arrive at the familiar progression used in The Girl From Ipanema.

Soloing on The Girl From Ipanema chord sequence.

There are a great many options when soloing on The Girl From Ipanema, far too many to be explored in this short article. Instead I’ve included a solo played by Herb Ellis off the 1981 album ‘Herb Mix’. Herb doesn’t often record in a trio setting such as this, on the album he is joined by  bassist Bob Maize and drummer Jimmie Smith so it is interesting to hear his approach. Learning and analysing solos by others is great way to bring fresh ideas into your own playing. In this solo Herb doesn’t do anything particularly groundbreaking, his solo is melodic and considered. The chordal elements in the B section are particularly nice. 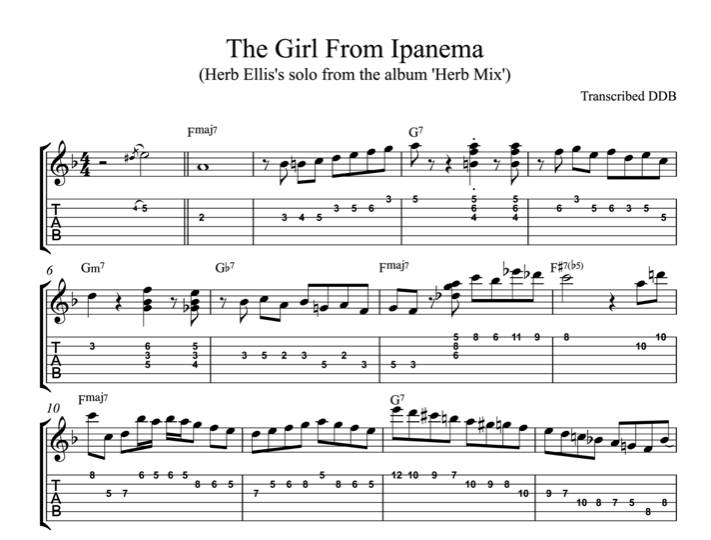 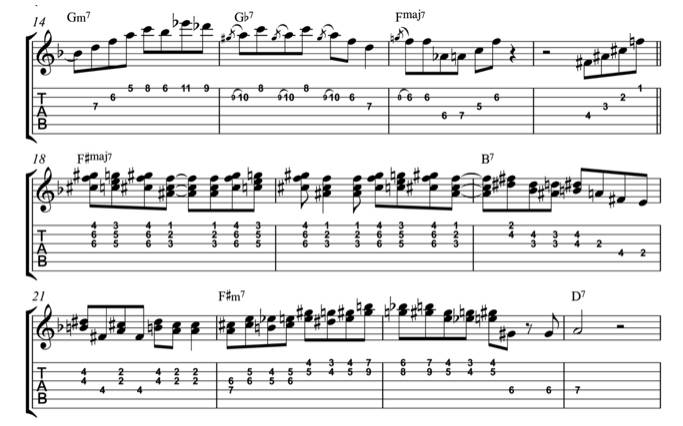 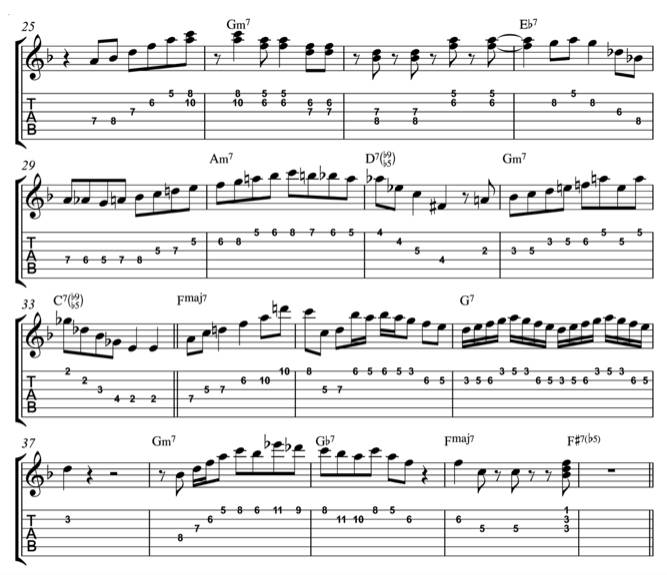 IMPROVE YOUR JAZZ GUITAR SKILLS AT THIS GREAT VALUE EVENT!

Whether you’re a gigging jazz guitarist or new to the art of playing jazz, provided you know your way around the guitar fingerboard this course is for you! 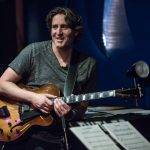 A recording artist, writer, educator and performer, he has played and taught in literally every type of situation around the globe for the last decade.

Premier Welsh jazz guitarist. Among the UK’s finest jazz educators. “Trefor believes in demystifying jazz guitar, teaching his students what is important, and demonstrating that simplicity often wins the day”

MASTERCLASS BY ADRIAN INGRAM FOR GROUP A ONLY. SATURDAY AFTERNOON 2 – 4pm. 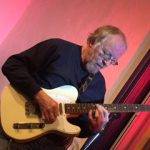 Widely recognised as one of the foremost authorities on the jazz guitar, Adrian is a renowned player, teacher and author. His books include ‘Wes Montgomery and The Gibson L5: It’s History and Players

A choice of two levels of tuition. Topics covered include performance, accompaniment, chord melody and improvisation.

Wide choice of reasonably priced accommodation available in Wrexham and the surrounding area.
SINCERE THANKS TO THE SPONSORS OF OUR JAZZ GUITAR EVENTS, BARNES AND MULLINS LTD, FOULDS OF DERBY, FRAILERS AND BACK ALLEY MUSIC.
Registered Charity No. 508519 President: Martin Taylor MBE.