I’ll Remember April was written by Gene de Paul, with lyrics by Patricia Johnston and Don Raye and made its debut in the 1942 Abbott and Costello comedy Ride ‘Em Cowboy. It was also featured on Johnny Smith’s 1956 critically acclaimed album ‘Moonlight in Vermont’

Johnny’s solo on the track is interesting as begins with a break based on a G major chord with the addition of the note C#.

When the band kick back in the third bar he plays a figure based on F#minor pentatonic over the Gma7 chord.

Over Gm he still includes the note C#, this helps maintain a feeling of unity with the opening statements.

Here is part of the solo Johnny plays. 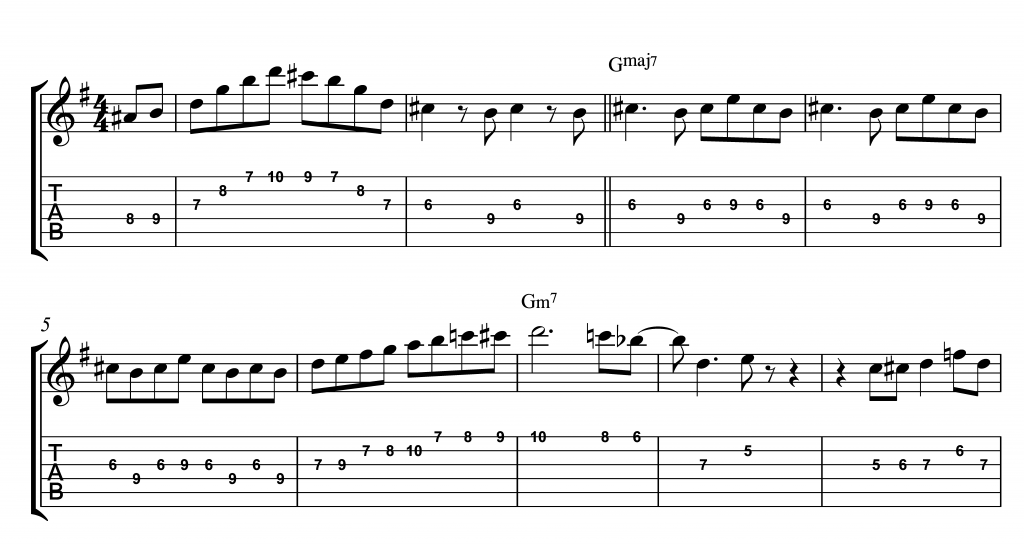 This article picks up on certain things discussed in last months newsletter piece ‘Effective Chord Accompaniment’. This section maybe become a series and it is certainly worth exploring as accompaniment is often one of the more neglected parts in a jazz guitarists arsenal. This month could I suppose be thought of as accompanying yourself.

This is the chord progression to Makin’ Whoopee by Walter Donaldson.

Here it is using only 10ths.

Whilst pleasant enough many of the more important elements in the chords are missed, particularly 7ths, these impart function to a chord. Here is the progression again this time using other intervals and chord notes to highlight the harmony more efficiently.

These intervals can be used to outline the harmony in between the melody. 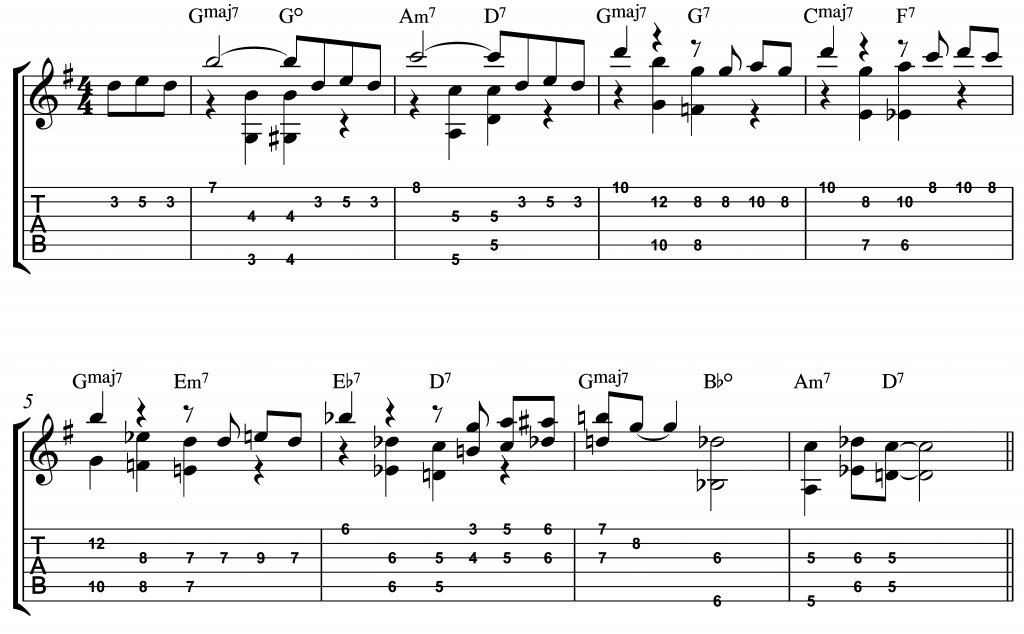 Here is a similar approach to the song All Of Me. Here the intervals are also used to create rhythmic fills as well as impart chord movement. This excerpt should be analysed to see how the harmony is implied with these simple intervallic elements. One bar that is unusual is bar 11. Here Am is delayed by a bar and a diminished chord is used in its place to imply E7b9. 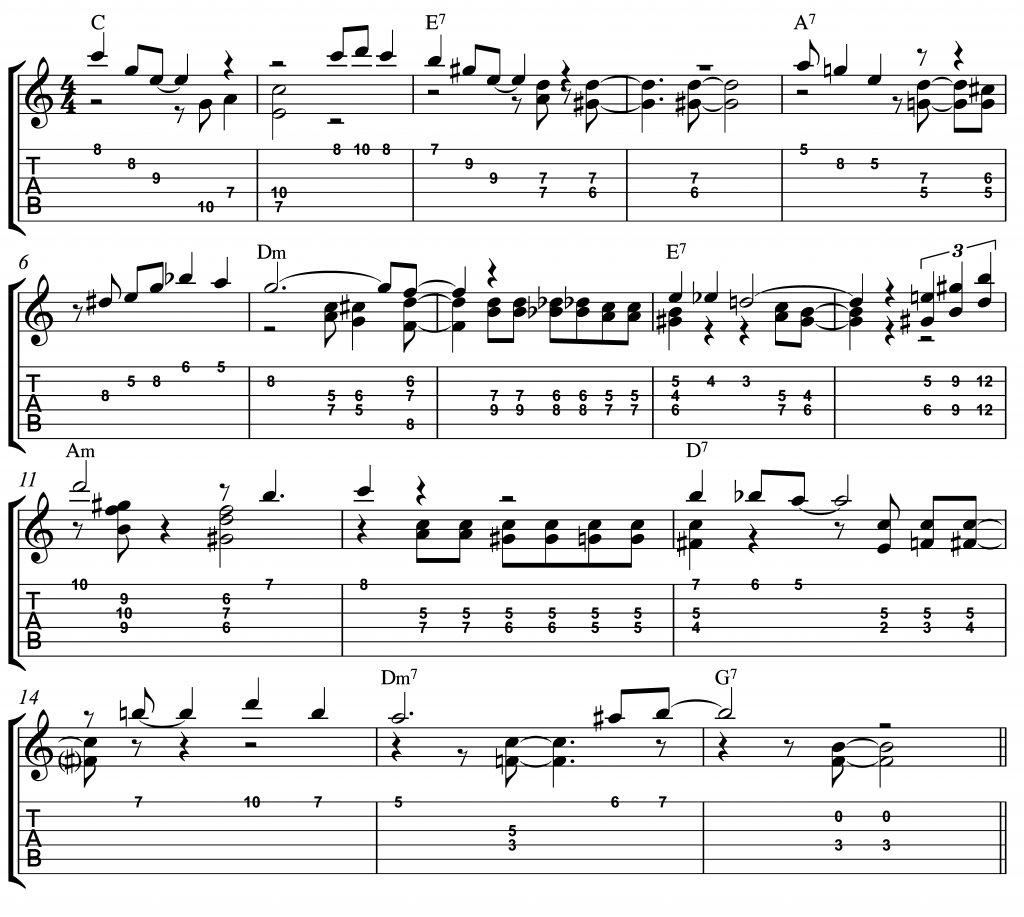 In part 1, in the December issue, Daniel had just completed the body binding. I had a quick trip

over and we discussed the neck profile, and decided a ‘soft V’ shape would be most comfortable. A few pictures of the remaining build process: – 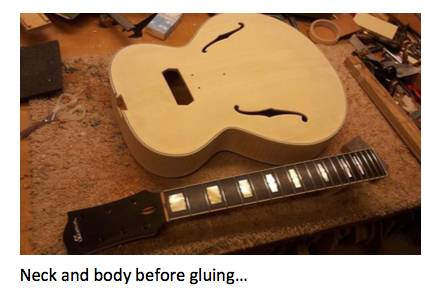 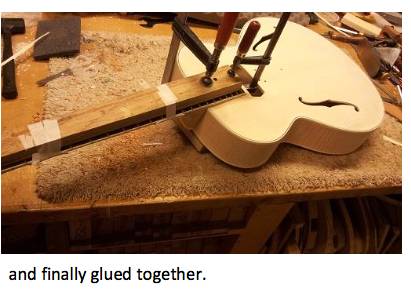 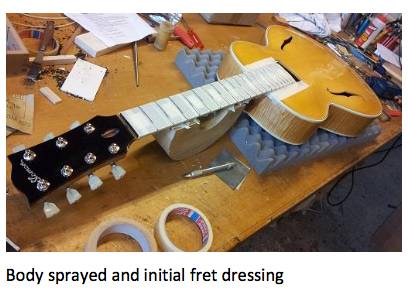 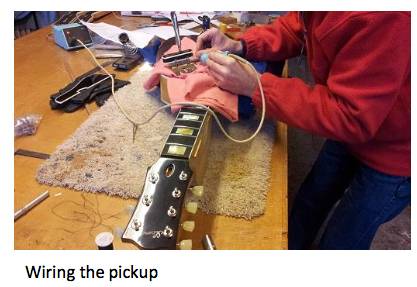 At last, the email I had been waiting for, the guitar was ready, and within a few days I was back in The Hague. I was quite nervous when I phoned Daniel and arranged to meet him at his studio; what if I didn’t like the guitar! There was nothing I could have done about it, it was mine regardless of how I felt about it.

I had nothing to fear. I picked up the guitar and it felt as if it had come home., a few quick tweaks, to set up

the action to my liking, and I left Daniel’s studio feeling very proud the be the new custodian of this unique Slaman guitar. 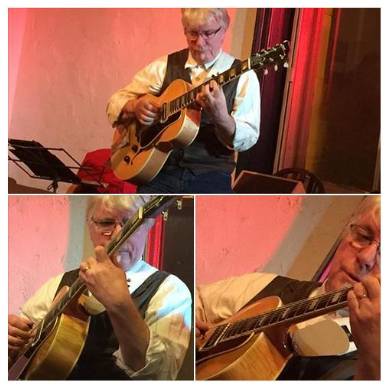